About one hundred years after Alexander Graham Bell invented the telephone, deaf and hard of hearing people were able to communicate over public telephone lines. This delay has been a very real disadvantage in terms of social, education, training and employment advancement.

A connection at last

In 1973 the first UK telephone call between two deaf people was made between two Breakthrough Trust members, Andrew Kenyon in London and David Hyslop in Birmingham. They used a teletype machine and the Phonetype system invented by deaf American scientist Robert Weitbrecht. By the end of that year there was a network of about 15 Phonetype units and the equipment was sold and maintained by Finedon Communications, an initiative of Breakthrough Trust. 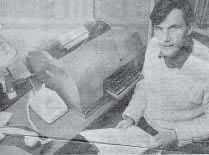 A link-up bureau soon followed (in a Leonard Cheshire Home in Ampthill, Bedfordshire) to allow those using a Phonetype or TTY to make calls to call those without special equipment – the text messages being

converted into speech by the bureau operator and vice versa. By 1978 there were 165 phonetypes in use throughout the UK with five linkup bureaux.

In 1981, Kegwain Ltd which had been working with Breakthrough introduced the Vistel, the visual telephone. In the following year the Government helped fund the replacement of teletypes with Vistels and the first 999 emergency call service for text users was established. By 1985, the Vistel Telephone Directory had grown to 1000 names.

The Visicom project of 1982, funded by the Government and BT, and run by Breakthrough, tested and evaluated the existing telecommunications systems and equipment that could be used by deaf people. A variety of equipment was supplied to 75 deaf people for one year and it soon became clear that email was of huge significance to deaf people – they could now use a telecoms service on equal terms with hearing people. This led to the first deaf electronic mail networks: BKU run by Breakthrough and XCH by RNID.

A further project – the Hasicom project – helped to promote telecoms for deafblind people especially through the development of Braille terminals for use with email.

In 1984 an action research project, the Reading HABIT, enabled a local community of deaf and disabled people to access information via Prestel and to communicate through a simple mailbox. The project showed that, with appropriate financial help and support, anyone could use new tech- nologies to great benefit.

As technology change accelerated, the Vistel II was introduced, enabling back-to-back and email contact, as well as giving more memory and word processing and answerphone facilities. With a Government grant, Breakthrough distributed 300 Vistel II terminals to public places including libraries and hospitals. In the early 1980s, a prototype telephone relay service emerged
– RNID’s TED – which became the direct forerunner of RNID Typetalk.

Issues for hard-of-hearing people were also beginning to be addressed and in 1981 public phones began to be adapted for hearing aid users. In 1985 I set up a charitable enter- prise within an academic environment, Bulmershe College, to “empower deaf people of all ages to lead fulfilling lives through the use of innovative commu- nications technologies”. And last year that charity, Deafax, celebrated its 21st anniversary. Its work has touched the lives of 60,000 deaf and hearing people worldwide.

The first electronic contacts were made between key deaf people across Europe in the Euroaction Electronic Mailbox project in 1986. Hailed as a tremendous breakthrough, it paved
the way for greater participation and integration of deaf people in Europe.

The original article as featured in TAG